So after stumbling upon The Godfather on Bravo last week I decided that I should really just sit my ass down and watch this movie. It seemed pretty ridiculous that a person such as myself - who watches movies endlessly - has never seen this movie!

I watched it, and yes it was awesome but that's not what this journal is about. This is about the fact that Al Pacino was a fucking HOTTIE BONES back in the day. Nice face, nice yes, good hair. He had it all (except height). Even my mom had a fangirl moment when she walked in and saw me watching this movie. So my question here is WHAT THE HELL HAPPENED TO THIS MAN?! He went from being a seriously schmexy biotch to being a scary old man. Age is a bitch. 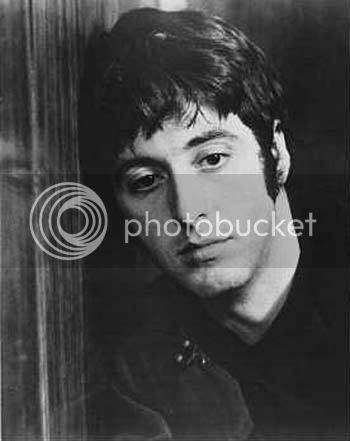 Check out those sideburns. YUM!

So as of last night I decided to make use of this account... well besides lurking on various communities and using lulzy LJ lingo.

Sad thing about this now is that I really have nothing to say.

Well I can think of one thing. iTunes shuffle has been kicking so much ass lately. I have been having a hot, steamy, passionate love affair with the shuffle function on my iTunes. The other night it played songs that I haven't heard in the longest time (but of course never forgot) and it was like seeing an old friend (only not really because when you see an old friend it's usually really awkward, this wasn't).

What did it play you ask? "Oh What A Lonely Boy" by Andrew Gold - A delicious 70s groove about neglectful parenting. Gotta love that. "The Boys of Summer" by Don Henley - a melodious tune about lost love. Seriously, how does he sing that high? I don't get it, but it's a great song and I love the lyrics. Don Henley fucking rules, any drummer who can drum and sing at the same time kicks ass in my book. It also played "Hot Child In The City" by Nick Gilder. This song just rules because even though I'm pretty sure it's about a teenage prostitute, it makes me want to be the baddest bitch on the street.

On a side note, I'm currently obsessed with the song "Road to Nowhere" by Talking Heads. I was perusing the iTunes store when I saw sir Ronnie's celebrity playlist which consisted of several good songs (obviously) one of which was "This Must Be The Place (Naive Melody.)" That quickly became my anthem for the thanksgiving vacation and led to some further downloads. The week following I was all about "And She Was" which made me want to me some awesome quirky girl that weird dudes like David Byrne write songs about and now we're here... all about "Road to Nowhere."

I had a little thing for Talking Heads in 10th grade when I listened to "Psycho Killer" just about everyday but I think  this will prove to be a more fruitful relationship.

P.S. Check out this lil gem Jackie made for me:

I GOT CAUGHT USING THE DREADED LOWERCASE IN A CAPS CHAT SO I'M SERVING P33NANCE W/ PICSPAM. THEM: BELTS

A REVIEW UP ON

_killmenow_ (IN REGARDS TO ADDITIONS TO THE GHEYZ SHOWS), AND I QUOTE:

"Oh sure, bassist Mark Stoermer stood somewhat motionless most of the evening as usual."

TRUER WORDS HAVE NEVER BEEN SPOKEN

HERE'S THE REST IS POSTED ON

FOR SOME REASON LJ IS BEING A BIG OL' SLUT AND NOT LETTING ME ADD THE DIRECT LINK!!!

DON'T KNOW IF Y'ALL SAW THIS LIL GEM BUT I LOVE IT!

P.P.S WHY IS RONNIE THE ONLY ONE WHO IS WILLING TO DO THING LIKE THIS? WHERE ARE THE OTHER DUDES? ANTI-SOCIAL BASTARDS.
Collapse